Founder of LYAPKO medico-production company,
a reflexologist of the highest category,
Candidate of Medical Science, inventor. 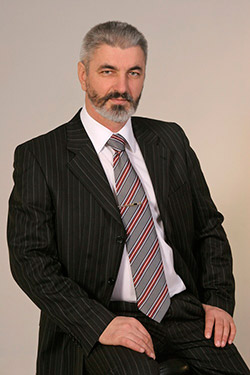 Nickolay Lyapko was born on May 13, 1954 in Donetsk. In 1974 he graduated from Donetsk medical secondary school. In 1982 he graduated from Donetsk state medical institute with a degree in "Medical care". Since 1983 he worked as a doctor of "Ambulance" in Maryinsky central regional hospital. In 1989, after the successful termination of courses, he became a reflexologist of Maryinsky  central regional hospital. Later he studied under Doctors K.P. Buteyko, N.A. Kasyan.

Nickolay Lyapko studied such non-traditional methods of treatment as a bee-stinning, bone setting (manual therapy), different types and systems of  healthy nutrition. At the same time he was interested and engaged in radiotronics. On courses of acupuncture  Nickolay Lyapko got acquainted with I.I. Kuznetsov's ipplikators and noted their main shortcomings. For mass consuming Ipplikators Kuznetsov were made of polymer (harmful, toxic and alien to a human body material). For manufacture of exclusive kinds of  ipplikator Kuznetsov metal needles were used (sewing needles; needles from record players), however, they were not safely fixed in a basis, and as a result — fell out. Nikolay Grigoryevich decided to enhance the idea. The first Lyapko applicators were manufactured manually, by means of inner tubes,  needles from record players and squared paper sheet (the inventor by means of a sheet of paper labeled bands from the rubber bag cut on a part assumed as a basis and I placed needles); afterwards he began to use bands made of cloth and combing needles, however, the effectiveness  was insufficient. Modification of a needle in the form of a shoemaking nails with club-shaped and normal heads was even more universal.

Daily medical practice of doctor Lyapko assumed contact with great numbers of patients, sessions of massage and acupuncture. However, to help all of them, using only two human hands seemed not quite real and not very productive. Desire to people has also pushed Nickolay Lyapko to create a device which could replace human hands and carry out reflex, mechanical and galvano-electric influence at the same time. The first Lyapko applicators were very small and process of their production was very labor-consuming (at the maximum effort there were 2-3 products a day). Nikolay Grigoryevich understood that there was a task to develop not only the device, but also technology of its production. After a while there was the first matrix of the device.

In 1996 the first application for the useful model "Lyapko N.G. Applicator» was filed. It assumed the needle with a head made in the form of nails,which had to be of metals or their alloys with various electric potentials. This specially sharpen needle performs the main function in modern Lyapko applicators. Subsequently, Lyapko Applicators have been protected by several patents, basic of which assumed the device representing the needles fixed in an elastic basis. In parallel with improvement of the device, there was an active improvement of unique technology of its production and sale. Nickolay Lyapko was the author and leader of all these processes.  On of the small territory of a former kindergarten the industrial complex, which doesn't have analogs in the world with huge technical capabilities, had grown. In 1997 Nikolay Grigoryevich set and headed Lyapko Medico-production company, a chain of Lyapko Health Centers. In 1999 the first applications on PCT system registration were filed, it was rather expensive process of registration in more than 15 countries of the world. Today Lyapko application devices are approved and by the Ministry of Health of Ukraine. These devises were created without attraction of any investments. The enterprise hires about one thousand employees, by own efforts contains more than 80 patents in the different countries of the world, renders the considerable help to other organizations and enterprises, exports products practically to all places of the world. In 2011 Nikolay Grigoryevich defended the dissertation on "Efficiency of complex sanatorium aftertreatment of patients with traumatic illness of a spinal cord", received degree of Candidate of Medical sciences. In 2010 he became the ideologist and the founder of the All-Ukrainian non-governmental organization "For Saving of the People", its idea is improvement of people`s health.

Dissertation work "Efficiency of complex sanatorium aftertreatment of patients with traumatic illness of a spinal cord" (it was defended on 27.10.2011).

On materials of the thesis 15 works, including 7 articles, are published in the specialized scientific publications registered by VAK, results of work are introduced in practice of work of medical institutions: DP "Specialized Spinal Sanatorium of the Academician M.N. Burdenko" (Saky), MVS medical rehabilitational center "Burevestnik" of Ukraine (Yevpatoriya),  "Kiev regional hospital" (Kiev) etc.

The treatment technique with Lyapko application devices is included in manuals for students and teachers of higher educational institutions of physical aftertreatment, physical training and also for doctors and experts in sports medicine and  kinesiotherapy.